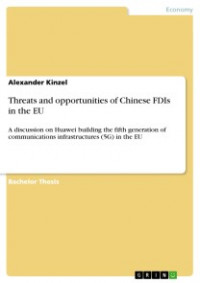 Threats and opportunities of Chinese FDIs in the EU

Bachelor Thesis from the year 2019 in the subject Economics - International Economic Relations, grade: 1, University of Vienna (Faculty of Business, Economics and Statistics), course: Bachelor Seminar: International Business, language: English, abstract: Whilst taking the current trends of Chinese Foreign Direct Investments (FDI) into account, this paper plans on discussing the threats and opportunities on Chinese FDIs in the race to construct the 5G infrastructure network in Europe.In today’s international markets, border-crossing FDIs flowing into the European Union (EU) from non-EU member states are bowing to the pressure of the uncertain economic situation. In 2017, FDI inflow to the EU from non-EU member states have declined rapidly by circa 89.2%1. China, surprisingly, only contributed to around 6.19% of the inflow of FDI from non-EU member states. According to data from a report “Chinese FDI in Europe: 2018 Trends and Impact of New Screening Policies” by Rhodium Group and the Mercator Institute for China Studies (MERICS), this stagnation is also mirrored in the flow of FDI from China to the EU, which fell from EUR 29.1 billion in 2017 to EUR 17.3 billion in 2018, which corresponds to a 40% decrease in FDI inflow to the EU2.The economic trade between the EU and China has decreased around 40% from 2017 to 2018 . In spite of this recent stagnation, we have observed an increase of Chinese FDI to the EU from 2.1 EUR billion in 2010 to 37.2 EUR billion in 2016, with the only stagnation in this time frame (2019 to 2016) occurring from 2012 to 20133. The changing course of the total value of Chinese FDI to the European Union discussed in the sentences above are largely due to fluctuations in the value of M&A transactions, whereas the value of the Greenfield investments remains largely stable from 2010 to 2018. Hence the more volatile course of the values of M&A transactions, the ratio of Greenfield investments to M&A transactions also act accordingly.In spite of the decrease in Chinese FDI in the EU in recent years, as seen in Figure 1, there have been a more equal and diverse investment in a broader number of sectors in the European Union, instead of proportionately large FDIs in a few sectors as seen through years 2015 to 2017 in Figure 1. This recent decrease in Chinese FDI abroad which includes a 20% decrease in Chinese mergers and acquisitions (M&A) in the first six months of 2017, is likely to be as either direct or indirect effect of the Chinese regulatory tightening on Chinese FDI .