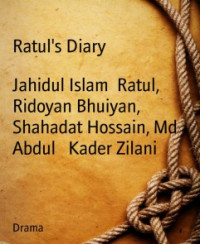 It was evening then. Rimi still can&apos;t believe what she listened from her brother. She lied on her bed with tears in her eyes rubbing her abdomen where her child was spending the fourth month. Rono hasn&apos;t come home till now. Does it mean her brother is telling truth? But still, she can&apos;t believe her brother. If Rono has an affair with another woman, he wouldn&apos;t have entered Rimi&apos;s life. Is God so cruel? If the words that are spoken by her brother are true, then Rono wouldn&apos;t find her loving wife alive. So let me start from the first. Rajendra (nickname Rono) and Rimi are employees from a private company. They both graduated from the same university. They were friends and gradually their friendship turned into a relationship of husband and wife. Except for Rimi&apos;s younger brother, all accepted their marriage. God knows what was the problem with the brother with their marriage. He started poisoning Rimi&apos;s mind about Rono. Rimi and Rono were like two souls in one body.  Since Rono heard that he was going to be a father, he was taking great care of Rimi. All things and wishes that Rimi wants, Rono granted them. Rimi didn&apos;t hear him speaking harshly to her. Rimi&apos;s mother-in-law and father-in-law didn&apos;t let her think that she was away from her parents and living in her in-law&apos;s house. Rimi was like a daughter to them. But today her brother shared a video where Rono was chatting in a park with another woman. In reality, the video was only an edited version, only to poison Rimi&apos;s mind about Rono. She got up and went to the other room where her in-laws were sitting and chatting. Seeing Rimi her mother-in-law was stunned. She said," Mom, I didn&apos;t expect your son to cheat with me. Now, I cannot leave him. You know I am carrying his child in me. " Her mother-in-law Mrs. Roy asked," What happened my child? " Rimi then showed the video sent by her brother. Just then, Rono entered the room. He has returned just now. Mr. Roy looked at him angrily and said," Rono, what is this? Is this the result of your wedding? You cheated on a girl who loves you so much. "  Mrs. Roy said," I can&apos;t believe this. Rono, why did you do this?"Rono told," Wait wait!!! It is me but no girl or woman was sitting beside me. I think someone has edited this video. " Rimi asked, "What do you mean?" Rono told," I was sitting with my colleague Arnab. You know him. If you don&apos;t believe me, then ask him about the incident." Rono then examined the video and concluded that it was an edited video.That night after dinner, Rimi was sitting quietly on her bed. She was burning in the fire of repentance. Just as Rono came and held his hands in her arms, Rimi broke out in tears. It seemed that all her sorrows were coming out through tears. Rimi told," I am very sorry. I didn&apos;t know that my brother hates you so much. I am ashamed of him. Please forgive me. I love you very much. " Rono consoled her and remarked," You have done nothing wrong. Your brother had done wrong. Remember one thing, the ship of relationship can be rowed with the oar of belief. I always fervently pray to God that our relationship might be strong till our death. I love you too. Remove the negative people who are disturbing your peace. " Rimi from then on closed ties with her brother. From then on, no one was there to break their peaceful life.