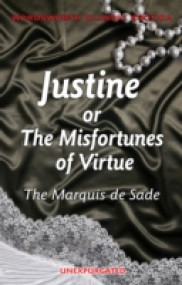 The Wordsworth Erotica Collection includes some of the finest Victorian and Edwardian examples of the genre. About this book: Justine, the most celebrated of the novels of the Marquis de Sade, was written in three versions. This translation is taken from the first version- and unlike the other two is a gem of eighteenth century literature. Widely execrated by de Sade's contemporaries and by modern Mrs Grundys, it is an innovative novel of considerable novel of considerable depth and psychological insight. Deserted by her father on his bankruptcy, and the subsequent death of her mother, the virtuous Justine is thrown onto her own resources. As she makes her way in the world she is subjected to the most frightful humiliations- flogging, rape and forced labour, which lead her to believe that virtue is not its own reward.