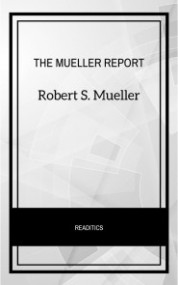 The Mueller Report: The Final Report of the Special Counsel into Donald Trump, Russia, and Collusion

In the future, The Mueller Report may be judged as the most important document of our time. And no matter where you reside on the American political spectrum, you will probably agree that it will have far-reaching implications for the balance of power among the three coequal branches of government that create, administer, and apply the laws of our republic. With forewords by Lt. Col. Allen B. West (Ret.), and the Hon. Dan Boren, both former congressmen who served on opposite sides of the aisle while Robert Mueller served as director of the FBI, they hold insight into the leadership of the organization created expressly to investigate the questions answered by this report.