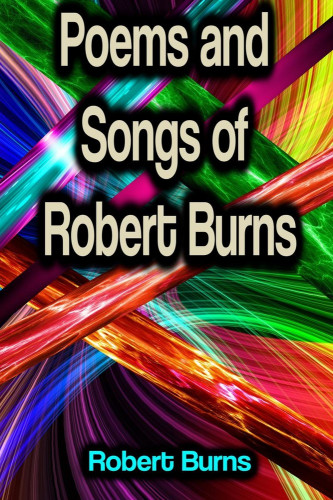 Poems and Songs of Robert Burns

Poems and Songs of Robert Burns Robert Burns - Robert Burns (1759 – 1796) called himself "an Aeolian harp strung to every wind of heaven." His first volume of poems, entitled Poems, Chiefly in the Scottish Dialect, was published in 1786. An immediate success, it established Burns's poetic reputation, which has grown over two centuries to the point where he is not only the Scottish national poet but the object of a cult unique in British poetry. The present volume contains 43 of his finest poems and songs, reprinted unabridged from an authoritative tenth-century edition. Included are "The Twa Dogs," a deft satire of the Scottish upper classes; "To a Mouse," one of the poet's best known, most charming works; "Address to the Unco Guid," an attack on Puritan hypocrisy; "Holy Willie's Prayer," one of the great verse-satires of all times; as well as such favorites as "The Cotter's Saturday Night," "To a Mountain Daisy," "The Holy Fair," "Address to the Deil," "The Death and Dying Words of Poor Mailie," and many more. It is not necessary here to attempt to disentangle or explain away the numerous amours in which he was engaged through the greater part of his life. It is evident that Burns was a man of extremely passionate nature and fond of conviviality; and the misfortunes of his lot combined with his natural tendencies to drive him to frequent excesses of self-indulgence. He was often remorseful, and he strove painfully, if intermittently, after better things. But the story of his life must be admitted to be in its externals a painful and somewhat sordid chronicle. That it contained, however, many moments of joy and exaltation is proved by the poems here printed. Burns' poetry falls into two main groups: English and Scottish. His English poems are, for the most part, inferior specimens of conventional eighteenth-century verse. But in Scottish poetry he achieved triumphs of a quite extraordinary kind. Since the time of the Reformation and the union of the crowns of England and Scotland, the Scots dialect had largely fallen into disuse as a medium for dignified writing. Shortly before Burns' time, however, Allan Ramsay and Robert Fergusson had been the leading figures in a revival of the vernacular, and Burns received from them a national tradition which he succeeded in carrying to its highest pitch, becoming thereby, to an almost unique degree, the poet of his people. He first showed complete mastery of verse in the field of satire. In "The Twa Herds," "Holy Willie's Prayer," "Address to the Unco Guid," "The Holy Fair," and others, he manifested sympathy with the protest of the so-called "New Light" party, which had sprung up in opposition to the extreme Calvinism and intolerance of the dominant "Auld Lichts." The fact that Burns had personally suffered from the discipline of the Kirk probably added fire to his attacks, but the satires show more than personal animus. The force of the invective, the keenness of the wit, and the fervor of the imagination which they displayed, rendered them an important force in the theological liberation of Scotland. The Kilmarnock volume contained, besides satire, a number of poems like "The Twa Dogs" and "The Cotter's Saturday Night," which are vividly descriptive of the Scots peasant life with which he was most familiar; and a group like "Puir Mailie" and "To a Mouse," which, in the tenderness of their treatment of animals, revealed one of the most attractive sides of Burns' personality. Many of his poems were never printed during his lifetime, the most remarkable of these being "The Jolly Beggars," a piece in which, by the intensity of his imaginative sympathy and the brilliance of his technique, he renders a picture of the lowest dregs of society in such a way as to raise it into the realm of great poetry