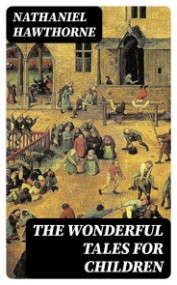 The Wonderful Tales for Children

The Wonderful Tales for Children compiles of several Hawthorne's collections. A Wonder-Book for Girls and Boys (1851) is a children's book in which Hawthorne rewrites myths from Greek mythology. It was followed by a sequel, Tanglewood Tales for Boys and Girls. The Snow-Image, and Other Twice-Told Tales is the final collection of short stories published by Nathaniel Hawthorne in his lifetime, appearing in 1852. Grandfather's Chair is a collection of tales on the Puritan History and along with Biographical stories contribute to the historical knowledge of the children. American novelist and short story writer Nathaniel Hawthorne's (1804-1864) significantly contributed to the Children's Literature. His ancestors include John Hathorne, the only judge involved in the Salem witch trials who never repented of his actions. Nathaniel later added a "w" to make his name "Hawthorne" in order to hide this relation. Contents: Twice-Told Tales (1837) Grandfather's Chair (1840) Biographical Stories Wonder Book For Girls and Boys (1851) The Snow Image and Other Twice Told Tales (1852) Tanglewood Tales For Girls and Boys (1853)