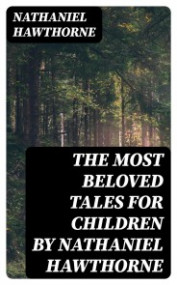 The Most Beloved Tales for Children by Nathaniel Hawthorne

"Grandfather," said little Alice, laying her head back upon his arm, "I am very tired now. You must tell me a story to make me go to sleep." "That is not what story-tellers like," answered Grandfather, smiling. "They are better satisfied when they can keep their auditors awake." (Grandfather's Chair)_x000D_ A Wonder-Book for Girls and Boys (1851) is a children's book in which Hawthorne rewrites myths from Greek mythology. It was followed by a sequel, Tanglewood Tales for Boys and Girls. The Snow-Image, and Other Twice-Told Tales is the final collection of short stories published by Nathaniel Hawthorne in his lifetime, appearing in 1852. Grandfather's Chair is a collection of tales on the Puritan History and along with Biographical stories contribute to the historical knowledge of the children._x000D_ American novelist and short story writer Nathaniel Hawthorne's (1804-1864) significantly contributed to the Children's Literature. His ancestors include John Hathorne, the only judge involved in the Salem witch trials who never repented of his actions. Nathaniel later added a "w" to make his name "Hawthorne" in order to hide this relation._x000D_ Contents:_x000D_ Twice-Told Tales (1837)_x000D_ Grandfather's Chair (1840)_x000D_ Biographical Stories_x000D_ Wonder Book For Girls and Boys (1851)_x000D_ The Snow Image and Other Twice Told Tales (1852)_x000D_ Tanglewood Tales For Girls and Boys (1853)