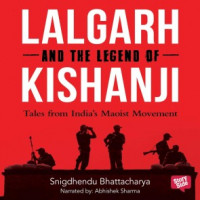 Lalgarh and the Legend of Kishnaji : Tales from India's Maoist Movement

'India is an unbroken chain of broken promises.' In 2009, Lalgarh in West Bengal exploded on to the national consciousness. A tribal upsurge against police atrocities escalated into fierce, full-fledged guerrilla warfare against the Indian state. Kishanji, the Maoist leader, who had successfully led the movement in Andhra Pradesh, Chhattisgarh and Bihar, was in charge. He masterminded military offensives that shook the state, supervised 'alternative development activities' and repeatedly escaped security dragnets. But what truly confounded the state were his telephonic interviews with the media, often on live television, and the frequent press conferences. Kishanji was indeed the face of the Maoist movement in India – until the tables turned. Snigdhendu Bhattacharya was on the ground in Lalgarh, meeting Kishanji, speaking to Maoists and reporting on one of the bloodiest Naxal uprisings as it unfolded, right up to its sudden, chilling end. This is an epic tale of war not only between the state and the Maoists but also between a callous state and its desperate citizens. ©Harper Collins India 2018