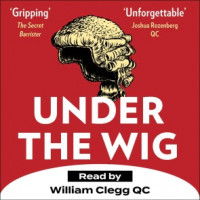 How can you speak up for someone accused of a savage murder? Or sway a jury? Or get a judge to drop a case?William Clegg QC is one of the leading criminal lawyers of his generation. In this vivid memoir, he revisits his most notorious and intriguing trials, from the acquittal of Colin Stagg to the murder of Jill Dando, to the man given life because of an earprint and the first Nazi war crimes prosecution in the UK.All the while he lays bare the secrets of his profession, from the rivalry among barristers to the nervous moments before a verdict comes back — and how our right to a fair trial is now at risk.Under the Wig is for anyone who wants to know the reality of a murder trial. Switch off the TV dramas and plunge into the criminal law in action. Well-known cases featured:The Murder of Rachel Nickell on Wimbledon CommonThe Chillenden Murders (Dr Lin and Megan Russell)The Trial of Private Lee CleggThe Murder of Jill DandoThe first Nazi war crimes prosecution in the UKThe Murder of Joanna YeatesThe Rebekah Brooks Phone Hacking TrialWilliam Clegg QC, is one of the most celebrated advocates at the English bar. A barrister for 47 years, he has been the go-to lawyer for complex murder and fraud cases for decades. He is head of chambers at 2 Bedford Row, one of the four leading criminal sets in London.REVIEWS'This is a gripping memoir from one of our country's greatest jury advocates, offering a fascinating, no-holds-barred tour behind the scenes of some of the most famous criminal cases of modern times.'— The Secret Barrister'Countless veteran lawyers have produced page-tuners based in the fictional world of law, but in Under the Wig William Clegg, QC, has distilled his extraordinary life in the criminal courtroom into a yarn equally as gripping.'— The Times'One of England's best barristers provides a fascinating sometimes hilarious combination of a personal odyssey and insider accounts of the most important and famous court cases of recent times.From the infamous case of Colin Stagg and the Wimbledon Murders to war crimes in Belarus and Bosnia and the Murdoch phone hacking trials we share and applaud the author's deep commitment to justice and his infectious enthusiasm for one of the world's greatest professions. An absolute must read for anyone who aspires to join it (and anyone who already has.)'— Bob Marshall-Andrews QC'Bill Clegg's memoir draws on some of the most high-profile criminal prosecutions of recent years to illuminate the career of a defence lawyer at the peak of his success. Deftly weaving personal reminiscences into the view from counsel's bench, he solves one high-profile murder case long before the police and ensures that justice is finally done in another after the tactics adopted by a better-known QC have led to a miscarriage of justice.''Unlike many works of this genre, Clegg's case-book eschews endless exchanges with long-forgotten judges, lawyers and villains. Like the successful jury advocate that he is, Clegg reduces his story to its essence. He speaks plainly, sparing us the the bombast and the braggadocio. And those who still aspire to join the criminal bar will learn more from Clegg than Clegg ever did from Perry Mason.'— Joshua Rozenberg QC