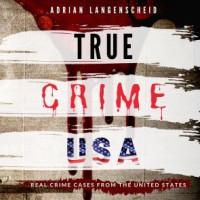 TRUE CRIME USA: Real Crime Cases From The United States | 14 Shocking Short Stories Taken From Real Life "Adrian's unsparing short stories are like the tragic storm that unexpectedly strikes. Before you know it, all he left behind is destruction. What remains are strong emotions, many questions and the feeling of being thrown back on what really matters in life." "Langenscheid's cool, clear short stories don't seem to aim for emotion, but precisely because of their brutal, matter-of-fact, neutral portrayal they are so incredibly shocking." TRUE CRIME USA – REAL CRIME CASES FROM THE UNITED STATES Cold blooded murders, fatal family dramas, and a spectacular robbery. It's no secret that True Crime is not for the faint-of-heart. These true and authentic criminal cases tell the stories of people known to us - friendly neighbours, devoted parents and/or loving partners. This book is about the people behind their bourgeois façade, where unspeakably deep human abysses exist that nobody, not even those closest to them, would have thought was possible. In his second book "TRUE CRIME USA"", one of Germany's bestselling true crime authors, Adrian Langenscheid once again documents the real crimes from real neighbourhoods. This time, the tales originate from the United States of America. Crimes that actually happened - you will be captivated and shocked, amazed and moved to tears. Shaken to the core, you will question everything you think you know about human nature. Even investigators, judges, defense lawyers and public prosecutors are not immune to the fact that these defendants are on trial for particularly horrific acts. The heartbreaking fates of the victims and their relatives are gradually exposed. In an ideal world, the final verdict ensures the just punishment of the perpetrators - but what punishment is truly-just in the face of such cruel reality? In fourteen true crime short stories, you will get to know some of the most-spectacular American true crime cases of the last few decades. The well-known German crime podcast, "Wahre Verbrechen", features two additional, spectacular cases. Crimes such as murder, manslaughter, kidnapping, abuse, fraud, treason and robbery often involve "people like you and me" whose lives have suddenly and completely changed from one day to the next due to tragic circumstances. Was it greed, the lust for murder, a perverse sexual inclination or a blackout, that made the serial killer act so ruthlessly? Does the perpetrator hide his true motive? Does he suffer from a psychological anomaly, like bipolar disorder or the Münchhausen deputy syndrome? How is it possible for such a small motive to erase the life of a child? What distinguishes us from those who take others' lives? Which criminalistic methods and procedures of modern psychology help to identify the most terrible murderers of our time? Each chapter of True Crime USA details a real criminal case, factually, truthfully and free of any greed for sensationalism. This poignant book gets under your skin. Heinous acts like the cold-blooded murder of five siblings by their own mother or the tearful death of an unjustly-condemned, coloured-boy who was never allowed to grow up. Every story in this book is an authentic portrayal of a serious crime. Life writes the most horrific stories and this book sums them up. Immerse yourself in the shocking world of true crime cases and real crimes! True Crime USA.