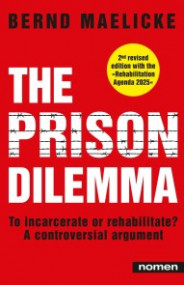 THE GERMAN PRISON SYSTEM – a topic that interests politicians when elections are looming, and the media whenever scandal is involved – is expensive and largely ineffective: over half of the people released from prison re-offend within five years. Locking people up does not rehabilitate them. Instead, the influences of prison subculture prevail. Bernd Maelicke examines the causes of this dilemma, and highlights pathways to the successful social reintegration of offenders. With the "Rehabilitation Agenda 2025", Bernd Maelicke outlines guidelines and an action plan for concrete and desperate improvement.His credo:"Punishing people is easy, but usually leads nowhere. Showing people a better path and helping them navigate it is difficult, but it's worth it."Roughly 50,000 people are released from German prisons each year. Over half of them have committed minor or moderately severe offences, almost one third are dangerous or serious offenders. While the German penal system – an exemplary model for a treatment-based approach – has experienced wide reform over the past decades, re-offending rates remain high. This "revolving door" that is the German penal system costs about 4.5 billion Euros each year.This is the starting point for offender rehabilitation expert Bernd Maelicke. His assumption is that imprisonment is only truly necessary for serious and dangerous offenders. In his view, for most offenders, prisons remain "schools of crime" that dolittle to change them for the better. The detrimental effects of prison subculture predominate.Drawing on case studies, personal and professional experiences, and empirical data, Bernd Maelicke demonstrates wherethe shoe still pinches. He outlines innovative strategies and projects that are slowly emerging in Germany, that focus onsupporting offenders with their social reintegration more effectively, and that policymakers and practitioners around theworld can draw on to better prevent re-offending and protect potential victims.